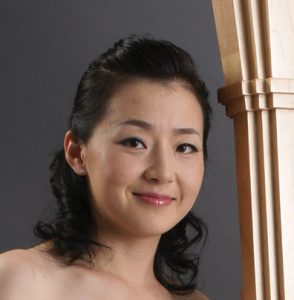 ﻿Since winning the Gold Medal of the 5th USA International Harp Competition in 2001, Dan Yu has performed solo recitals and chamber music concerts throughout the United States, Europe, and Asia, and appeared to great acclaim at Alice Tully Hall, New York, and Wigmore Hall, London.

As a harp teacher, Dan Yu has given master classes in the US, major conservatories of China, and the Royal Academy of Music in London. Since moving to Hong Kong in 2008, her students have won prizes at international and national competitions in France, Japan, the USA, Russia, Serbia, Korea, China, and Hong Kong. She also served on the jury of the prestigious USA International Harp Competition in 2013 and 2019.

Dan Yu’s performances have been broadcast on television and radio stations in USA, China, and Hong Kong. She has two classical solo CDs and one DVD released, “The Nightingale”, “Spring on the Moonlit River”, and “Dan Yu-Live Recital”.

Dan Yu holds Bachelor and Master of Music degrees from the Peabody Conservatory in Baltimore, and an Artist Diploma from Indiana University. Currently, she is the Music Director at the Hong Kong Harp Chamber, and harp instructor at Hong Kong Academy for Performing Arts. Dan Yu was also the Co-Chair of the Host Committee for the 2017 World Harp Congress in Hong Kong.