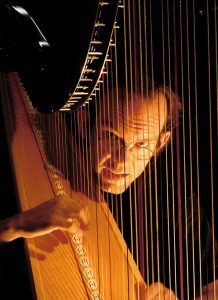 While attempting to live simultaneously in Brooklyn and on a farm in Switzerland, harpist Park Stickney is constantly in motion, traveling across show more

While attempting to live simultaneously in Brooklyn and on a farm in Switzerland, harpist Park Stickney is constantly in motion, traveling across Europe, the U.S. and Asia, as a soloist and teacher, as well as with a variety of ensembles whose music ranges from jazz to classical to rock.
He’s performed and taught in nearly every harp festival that exists, from Adelaide to Zaragoza, often several times (12 appearances at the German Harfentreffen, 6 for the Edinburgh Harp Festival, every International Harpfest since 1995..), has played Wagner with the Berlin Philharmonic (as a jazz harpist disguised as a classical harpist), profiting at the same occasion to play a solo jazz concert for the Philharmonic’s lunchtime series for 1200 people.

He’s appeared on the French television program “La Boîte à Musique”, performed on the QE2, recorded with the “Crash Test Dummies,” jammed with John Sebastian (of the Lovin’ Spoonful), recorded with the Crash Test Dummies, played with young oud students in the West Bank, given concerts in a mine in South-Tyrol, in a thermal bath in Switzerland, in a New York McDonalds, in Sri Lanka, in Hong Kong, in Moscow.. He’s played Broadway pits in NY, toured with the Fantasticks in Japan, and appears on page 97 of Patricia Cornwell’s novel “From Potter’s Field.”

In the fall of 1999, he was invited by electro-celtic harpist Rüdiger Oppermann to perform 25 concerts in Germany as part of his International Harp Festival. Stickney returned to Germany the following year, this time for a 10-concert solo tour. As Rüdiger and Park found themselves constantly jamming together at festivals, they decided in 2003 to form an “official” duo, by making the critically-acclaimed CD “Harp Summit” (“Two players at the top of their game share their complementary skill and empathy with the music.”- The Harp Column), touring Germany and Korea, and performing at the Edinburgh Harp Festival. This collaboration continued in Rüdiger’s 2004 and 2011 Klangwelten Festivals, which also featured musicians from Gambia, the Cook Islands, India, and Mongolia, with 40 concerts throughout Germany. In Spring 2005, Stickney & Oppermann toured 12 cities in the US, including New York, Philadelphia, Seattle, Boston, and LA. They returned in 2007 for a follow-up west-coast tour.

Another longtime collaboration is with Swiss flutist Regula Küffer, in a project called “Mozart & More,” which combines classical and jazz works in an improvisational setting. In March 2013, they performed the Mozart Flute & Harp Concerto with the Berne Chamber Orchestra, improvising cadenzas onstage.

An active teacher, Stickney is the jazz harp tutor at the Royal Academy of Music in London, and an assistant professor at the Conservatoire National Supérieur in Lyon, France. He also teaches a regular improvisation class at the Haute Ecole de Musique in Lausanne and has given masterclasses at, among others, the Juilliard School, the Berklee College of Music, the University of Minnesota, the Chopin Conservatory in Warsaw, the Hochschule für Musik in Munich and Frankfurt, the Musik Akademie Basel, the Paris Conservatory, the Barcelona, Madrid and Zaragosa Conservatories in Spain, the Ecole de Jazz et Musique Actuelle in Lausanne, and the Conservatories of Milano, and Torino in Italy. He also teaches privately in Switzerland, London, and New York.

He is also an enthusiastic but decidedly un-gifted Swiss volunteer fireman.
Valeyres-sous-Ursins, May 2013